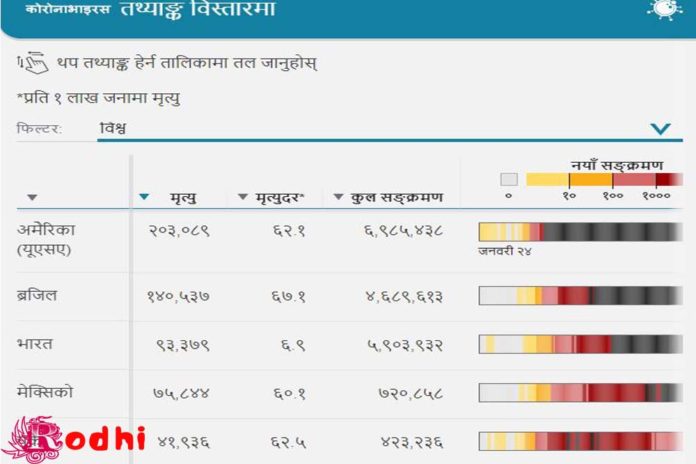 UN Secretary-General Antonio Guterres has called the numbers a “painful milestone”. “We must not take our eyes off everyone’s life,” he said in a video message. “They were mothers and fathers, husbands and wives, sisters and brothers, friends and colleagues. The pain is exacerbated by the brutality of this disease.”

The death toll from the coronavirus has risen sharply in the first 10 months of its life in Wuhan, China. So far, the coronavirus has reached 188 countries and infected 32 million people. ‘Lockdown’ and other measures taken to control the disease have led to economic recession in various countries. Attempts are being made to make a vaccine against Kovid-19. The World Health Organization has warned that 2 million people will die before vaccines become available in the most accessible way.

Where is the coronavirus spreading so fast?

Covid-19 has been confirmed in 7 million people in the United States. It accounts for one-fifth of all infections found worldwide. The number of infected cases had dropped in August after the second wave began in July. But it seems to be growing again.

Coronavirus is spreading rapidly in India. Over the past few weeks, more than 90,000 people have been infected every day. So far, Covid-19 has been confirmed in 6 million people, the highest number after the United States. But in India, the mortality rate is lower than the population. Brazil is the most infected country in Latin America. The country ranks third with 4.7 million infected so far. If you want read in nepali click here

Nepali Sad Status: Hello today I’m going to impart to you Best Nepali Sad Shayari in nepali which are absolutely one of...
Read more