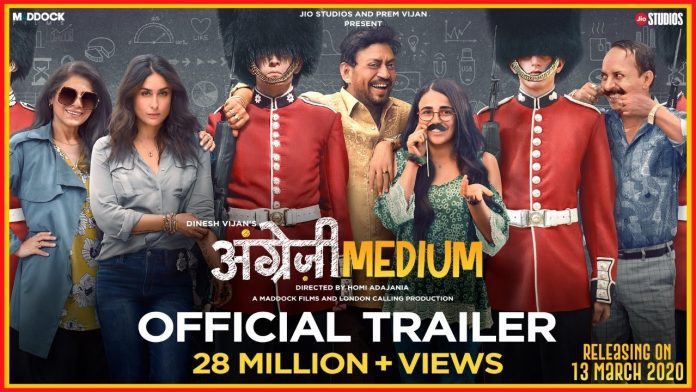 Angrezi Medium movie Review: The angrezi medium movie. Direct by- homi adajania cas by- Irrfan Khan, Kareena Kapoor Khan, Radhika Madan. Deepak Dobriyal movie duration 2 hour 25 minutes. Hindi Medium was a path-breaking film about a couple’s desire to get their daughter admitted to a good school. They try all sorts of loopholes to get that done. Angrezi Medium takes the idea forward and applies it to higher education on foreign shores.

Fans were eagerly awaiting the return of Irrfan Khan. Apparently, Irfan had been waiting for his fans since the time. He started shooting for the film after being cured of a deadly disease like cancer. There is no doubt that Irfan gave his fans more than expected in this film. Once again proved why he is called the able and effortless actor of this era.

Finally comes the day when Tarika gets an opportunity to go to London for further studies. Champak Tariqa, who is an affectionately affectionate father to his daughter, walks with him to make his dreams a reality. Gopi also supports him in this journey, but after reaching London. Tthe situation becomes something that Champak and Gopi had not even thought about.

In Irrfan Khan’s Hindi Medium. Which came before the English medium. Director Saket Choudhary touched on the relevant subject of language-divided society. Here director Homi Adajania went a few steps ahead with the attraction of overseas through. Young Generation as well as father- They are also seen investigating the daughter’s relationship. The first half of the film is very entertaining and tight. But the story starts to drag in the second half. Many tracks and characters are entered after the intermission. The climax is a bit dramatic, which is already guessed. more